Jude Dibia is an author and equal rights activist from Nigeria. Jude is the author of three successful novels and a number of short stories, which have been featured in both local and international anthologies and magazines. Jude is also a recipient of the Ken-Saro Wiwa Prize for Prose in his native country.

In 2005, when his debut novel, Walking with Shadows, was published, the rights and freedoms of LGBTI persons in his country was under extreme scrutiny with the Nigerian legislature pushing for harsher punishments and laws to proscribe homosexuals. Walking with Shadows was bold in addressing the existence of homosexuals in Nigeria and some of the abuses they endure. Jude has continued to write about the abuses of LGBTI people in Nigeria in his short stories.

With the passing of the Anti Same-Sex marriage law in Nigeria in January 2014, Jude made the decision to leave Nigeria before he becomes a target for his writings and stand against the harsh law that criminalizes homosexuality.

Jude is the current guest writer of Malmö City of Refuge. 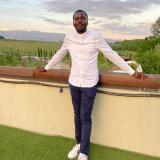